With California experiencing the worst drought in hundreds of years, water conservation is becoming a hot topic across the United States. A few simple ways you can reduce the amount of water used in your household are: Water your outdoor plants and grass between the hours of 10:00pm and 6:00am to decrease the evaporation rate. Check your home frequently for small leaks in shower-heads, toilets and faucets. Also, equip your home with water-efficiency devices that are made to increase water conservation. While the appliances or tools may be expensive, your lowered monthly bills will offset the price. More here

According to a new report from Sentier Research, the median household income has increased over the last three years, jumping to 3.8% in June, and averaging $53,891. Although median income has increased, it is still considered to be 3.1% below the mid-2009 high of $55,589. Gordon Green, a partner at Sentier, stated that “even though technically the recovery began in June 2009 the broad measures of unemployment were still high. As people found jobs, their incomes went up and then we started to see incomes turn around.” More here

Painting the interior of your home is a big job, but if you know what you’re doing, you can save hundreds by not hiring a professional painter. A few ways you can get a professional look without spending a significant amount of money are: Remove everything out of the room, including light fixtures and floor molding. Purchase a good drop cloth to cover and protect floors. Repair any cracks or dents in the walls and sand them down so the paint can better grip the walls. After sanding the walls, wash the sand dust off with a damp cloth. Prime your walls so the true color of the paint can be seen; it will also ensure the paint is applied smoothly. Lastly, purchase a roller that is lightweight and not too long. The roller should hold paint, but not create too much texture. More here 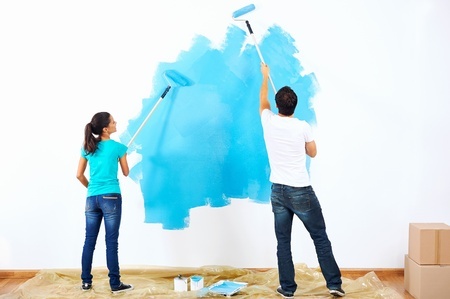